Are We Halfway to Market Dominance for Solar? In just a decade, solar power has gone from being a fringe technology for greenies to an almost-mainstream source of power, due to its increasing cost-effectiveness in many countries around the world. This is a remarkable evolution and demonstrates well why CitiGroup recently stated that the “age of renewables” is upon us.

I’m going to go even further in this article, however, and argue, as I did recently with respect to electric vehicles, that this 1 percent of global solar penetration is far more important than you might think.

Only 1 percent, you say? That’s tiny. But that 1 percent is actually halfway to the goal of market dominance when we consider recent growth rates and the likely growth rate in the future. I’ll explain below.

Ray Kurzweil, an American inventor and entrepreneur, formulated what he called the ‘law of accelerating returns’ after having studied numerous technology adoption curves. The classic example concerns computing power: Moore’s law holds that computing power will double about every two years while maintaining the same cost.

Sixty years after former Intel CEO Gordon Moore made this observation, the law holds true, though we’re actually doubling now about every year. Kurzweil discovered, however, that Moore’s law is just the latest incarnation of a much longer trend, as the figure below shows.

Figure 2: Kurzweil on the Fifth Paradigm of Increasing Computing Power 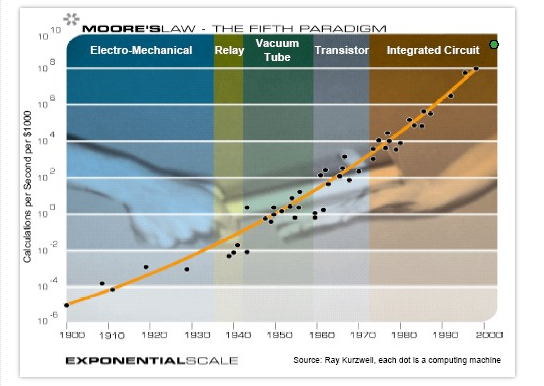 So how can 1 percent of all global electricity sales suggest in any way that we’re on the road to a world dominated by solar?

Kurzweil’s best example of this law is the Human Genome Project. This was a government-funded effort to decode the entire human genome in about fifteen years. Halfway through the project, the effort was only at about 1 percent completion. Many observers wrote off the effort as a failure that couldn’t possibly reach its goal.

Kurzweil, however, wrote at the time that the game was won, because 1 percent was halfway to 100 percent in the terms that actually mattered: the rate of improvement in sequencing technology.

And he was right. The Human Genome Project finished slightly ahead of schedule and helped to bring down the costs of genome sequencing technologies by orders of magnitude, as well as achieving dramatic reductions in the time it takes for sequencing. We can now pay about $1,000 to sequence our own genome in a matter of days.

Applying the Law of Accelerating Returns to Solar

The average global growth rate for solar over the last five years has been around 33 percent. Leading research firms estimate between 42 gigawatts and 48 gigawatts installed in 2014. IEA calculates that solar PV will produce 160 terawatt-hours in 2014, or 0.85 percent of global demand.

Seven doublings of 0.85 percent gets us to 108 percent. So what is the doubling time at 33 percent? There’s a simple cheat formula: 72/growth rate = the rough doubling time. So 33 percent leads to a doubling rate of a little more than two years (2.2 years).

Seven doublings of 2.2 years equals 15.4 years, at which point we would theoretically reach a solar penetration of more than 100 percent of current global electricity demand by 2029. (Of course, global electricity consumption is going to increase in that time, but for simplicity’s sake, I’ll limit my analysis to today’s level of consumption.)

Will this happen? Of course not. The growth rate will surely slow, as it has already in the last couple of years. This is to be expected: new technologies often see rapid growth rates as they catch on, and then the growth rate slows as higher penetrations are reached.

If solar continues to grow in coming years at an average rate of “only” 15 percent, we will reach about 8 percent of current global electricity demand by 2030. This is good but not great, considering the magnitude of the problems we face in terms of climate change and the use of fossil fuels.

So are we going to see a declining rate of growth, steady growth or perhaps even an increasing rate of growth as solar becomes more affordable around the world? The IEA report shows that only about a dozen countries were responsible for the vast majority of solar PV growth in 2013. Will this revolution spread quickly to other countries, or will the solar revolution catch on fire around the world? It appears it already is.

The center of gravity in PV installations in 2013 has swung away from Europe. But Asia, Latin America, the Middle East and North America are all budding (in some cases, exploding) markets that are keeping global growth steady.

We can’t forget our own backyard in this discussion. Major investment banks are finally starting to see the potential for solar in the U.S., including Morgan Stanley and Citigroup. America became the third-largest installer of PV in 2013, behind only China and Japan. We installed nearly 5 gigawatts of solar, enough to power over a million homes.

The U.S. also regained the top spot in Ernst & Young’s Renewable Energy Country Attractiveness Index in 2013. Combined with the increasing realization that solar PV is more affordable and natural gas prices continue to increase (natural gas is at about $4.50/mmbtu now, sharply up from a few years ago), we can expect to see far more solar in the U.S. too. And that’s a very good thing.

However, as solar reaches higher penetration levels in various countries and grids, integration issues will become more pronounced. I’m currently living in Hawaii, on the Big Island, where solar penetration is already more than 10 percent. That has slowed deployment in some areas because local utilities are worried about power quality and reliability.

High penetration of renewables can be managed in various ways, but energy storage technologies are the most promising long-term solution. Already, cost drops for batteries are below the Department of Energy’s targets. And recent analysis from the Rocky Mountain Institute shows that hybrid solar-storage systems will be competitive with conventional electricity in large portions of the U.S. by the end of the decade.

Summing up, under Kurzweil’s law of accelerating returns, we have reached, after over 40 years of development of solar PV technologies, the halfway point to market dominance. We are likely to see the second half of this journey take less time than the first half. Cost will probably not be the primary hurdle after a certain point. Rather, integration issues and the stranded costs of existing energy infrastructure will be the larger problems.

Future-thinking policymakers and regulators should learn from past adoption curves and recognize the potential for these technologies. We wouldn’t want ratepayers getting stuck with old, room-sized computers (i.e., coal plants) when they could have the coolest, nimblest new device (i.e, solar) with the same delivery potential.